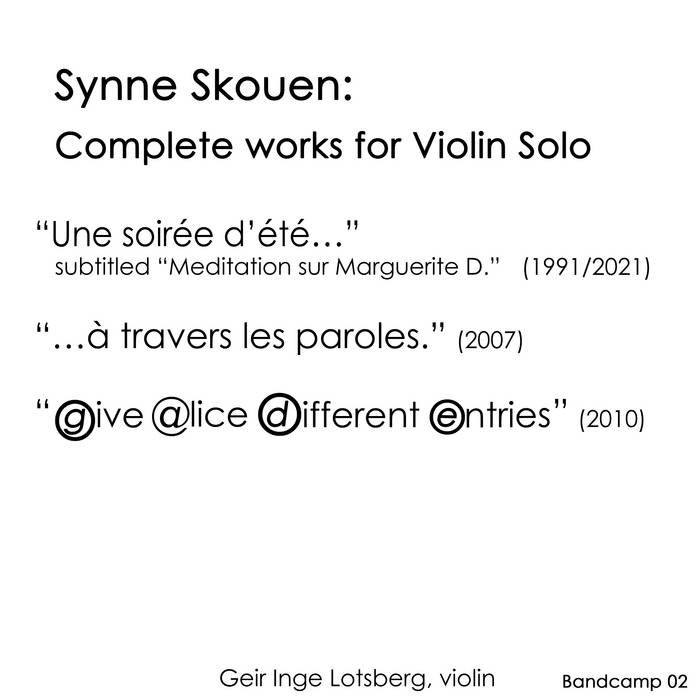 The first two pieces for violin solo were composed with more than 15 years between them, but the connecting link is an odd little book by french author Marguerite Duras, ”Les Yeux bleus Cheveux noirs” (”Blue Eyes, Black Hair”); a wonderful example of the importance of silence, and how a few hints can create the most intense images. Just as music can – without saying anything in particular – say everything.

”Une soirée d´été..” (”One summer evening..”) is the very first sentence in Duras´ novel, and ”..à travers les paroles” (”..in through the words”) is the very last.
The first piece was commissioned by violinist Arve Tellefsen for the Oslo Chamber Music Festival in 1991, and is dedicated to him. The last was commissioned by, and dedicated to violinist Geir Inge Lotsberg in 2007.

"give alice different entries" was commisioned as part of "Nine Solos for Nine Violinists", a cd (Aurora, ACD5067) featuring young violinists from Barratt Due Institute in Oslo, Norway. The project was a collaboration between Norwegian Society of Composers, the Aurora label and Barratt Due. The piece was recorded by Christopher Tun Andersen.
First live concert performance was given by Geir Inge Lotsberg 18. November 2012 in Oslo.

SYNNE SKOUEN (born 1950 in Oslo) studied at the Hochschule für Musik und darstellende Kunst in Wien (from 1969-73); took theory and composition with Professor Alfred Uhl and Professor Erwin Ratz, and experimental composition at the Academy´s electronic studio, directed by the composer Dieter Kaufmann and the composer and conductor Friedrich Cerha. During this period she was also a member of the experimental music theatre group ”Die Fremden” (with, among others, composer Günther Kahowez). In 1976 she earned a Diploma in composition at the Norwegian State Academy of Music following studies with Professor Finn Mortensen.

For a number of years she worked as a music critic in Arbeiderbladet , Oslo, and also became the first editor of the music periodical Ballade (now www.ballade.no). In 1993 she became head of music of the cultural channel, P2, og NRK (the Norwegian Broadcasting Corporation), a position she held until 1999, when she was asked to parttake in the reorganisation of NRKs cultural departments into one multimedial platform, becoming it´s first director.

From 2001-2005 she was the head of the board of the Norwegian Composer´s Union, during which she was also head of the Nordic Composers Council, and over the years she has been on the board in a number of different organisations, presently at Tono, Kopinor and NOTAM. As a contracted columnist in Aftenposten (www.aftenposten/Meninger/Signert.no) she keeps up her journalism, for the most part with articles on cultural affairs.

During the years as an employee in NRK, she was not active as a composer. In recent years she again works full time as a composer, for the time being with a grant from the Norwegian State. In 2011 her CD ”Call-Notes” won much acclaim, and was nominated to ”Spellemannsprisen”; the Norwegian Grammy. Her most recent work, Autumn Arias for the Norwegian Chamber Orchestra, clarinet and cello, was premiered during the Ultima Contemporary Festival in Oslo in September 2012.